Wasps are one of the scariest bugs out there. They are certainly not the only stinging bugs, but wasps almost seem to target people. Read on to learn about wasp swarms and why they are an issue at this time of year.

Why Are Wasps Swarming Right Now?

Certain kinds of critters are prone to swarming, locusts and bee swarms are what most people are familiar with. However, wasps swarm too. Unlike other types of swarms, which are relatively harmless, wasp swarms can be very aggressive.

Wasps are more active in warm weather, when their food supply is plenty. This leaves many people asking “why are they swarming?” Lucky for us, entomologists have the answer. Fall is when wasps swarm the most often.  Wasp nests often swarm when their food supply is getting low, but they still have enough energy to move. This makes autumn the perfect conditions in which to swarm.

In autumn, wasp swarms are acting as scavengers for the nest. Despite being insect, wasps are actually pretty smart. They know that humans have food. Wasp swarms often aggressively pursue humans because they know that’s high potential for food. Wasp swarms can seriously injure, or even kill, humans who get in their way. This makes it all the more important to learn how to avoid enticing wasp swarms. 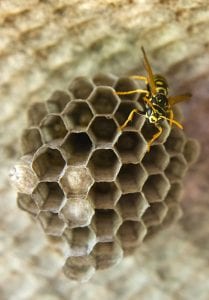 A wasp swarm may occur if you get too close to the nest.

Wasps have an extremely sensitive sense of smell, and they are omnivores. Which means that they love whatever you’re cooking. Whether your picnic is salad or steaks, it will attract wasps. Drinks are not exempt. Sugary sodas and alcohol also attract these pests. The best thing to do is keep your food covered unless you are actively eating it. For drinks, resealable or reusable bottles are the best way to keep wasps out.

Trash cans that have food waste in them will attract wasps. If you aren’t careful, you may have to deal with a wasp swarm in your garbage. This smelly predicament is an awful situation to deal with. To avoid this, use trash receptacles that are as air tight as possible. If your neighborhood has to have a particular style trash can, don’t worry, you have options. The best one is to double bag your food waste. Even if you can’t smell it, a wasp can.

Most species of wasps are fairly territorial, and won’t build their nest around pre-existing ones. You can purchase decoy nests and install them around the edge of your roof. These fake nests will deter real wasps from roosting around your home. Experts also suggest that you hang the fake nests on any outbuilding you have, such as sheds.

Homeowners may be tempted to grab a can of pesticide and take the nest down themselves. However, this action could result in serious harm. Wasps are already likely to swarm at this time of year, and an attack on their nest will only worsen these conditions.